Artists, Critics, and Dealers: A Conversation with Phyllis Kind 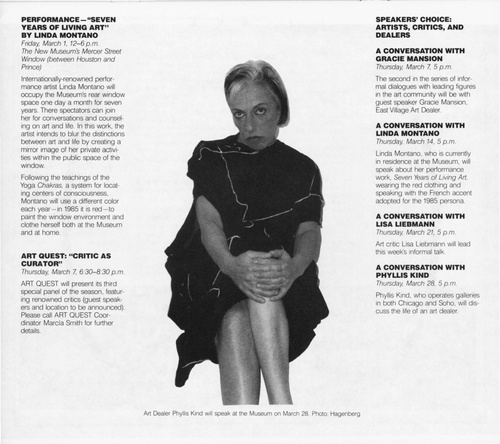 Artists, Critics, and Dealers: A Conversation with Phyllis Kind

Speakers’ Choice was a lecture series in which artists, art critics, writers, and art dealers from varied backgrounds spoke on a topic of their choice.1 Topics selected by the lecturers covered a broad range of subjects from music to politics and the influence of the media.2 The first series, Artists and Critics, held in 1983 in the newly opened Astor location, featured lectures by two artists and two art critics over four consecutive weeks. For the following series, Artists, Critics, and Dealers, organized in 1985, guest speakers, likewise, presented on their own topics, this time over six consecutive weeks and with the more informal format of a series of conversations.1

Phyllis Kind, operator of galleries in Chicago and Soho, discussed the life of an art dealer.